Single speed bicycles are one of the most common types of bikes today and all kinds of cyclists from recreational riders to advanced racers are drawn to them, but why? There are several benefits to single speed bicycles, but three of the main benefits of owning a single speed that will be discussed in this blog are simplicity, low maintenance, and affordability.

Single speed bikes are very low maintenance because there aren’t as many moving parts compared to multispeed bicycles. A single speed bicycle doesn’t have front or rear derailleurs and shifters, which is the most common cause of bicycle malfunctions. The only thing that a single speed owner needs to worry about maintaining on their bicycle is the tire pressure, chain tension, and brake adjustment.

Lastly, single speeds are often times more affordable compared to multispeed bikes both during the initial purchase of the bike and with any repairs that need to be done after the purchase of a bike. A large portion of the cost of a new bicycle lies within the drivetrain that can include the derailleurs, shifters, cassette, crankset, cables, and housing. A large majority of these parts don’t exist on a single speed, reducing the overall retail price of the bike. You may have noticed that I didn’t say value of the bike, because when comparing a $500 single speed to a $500 multispeed bike, you are most likely getting a better quality frame, wheelset, and bearings on the single speed versus the multispeed. With the elimination of the parts listed above, the overall maintenance cost is lower because you won’t have to have these parts replaced on a single speed. For example, you won’t have to pay the replacement cost of a bent rear derailleur because they don’t exist on a single speed bicycle.

Some of you may be wondering how it is possible to make it up a hill with a single speed bike. This is a very common question that we get asked, but it is more of a mental challenge versus a physical challenge (with some exceptions) when climbing a hill. A lot of people are programmed to shift into a low gear (easier gear) when approaching a hill, which causes them to lose momentum and forces them to climb the hill at a very slow speed. On the other hand, when riding a single speed bicycle you need to gain as much momentum as possible when approaching a hill. This will allow you to keep your speed up and help make your pedal stroke much easier. Once you have mastered the technique of gaining momentum, it will surprisingly be much easier than expected to get to the top of the hill. Yes, the first couple hills might be a challenge, but you will get the hang of it over time!

At Wyatt Bicycle Co, we designed a bike that combines the use of single speed simplicity and modern design to create the perfect ride for your daily commute and it’s called the Street King. 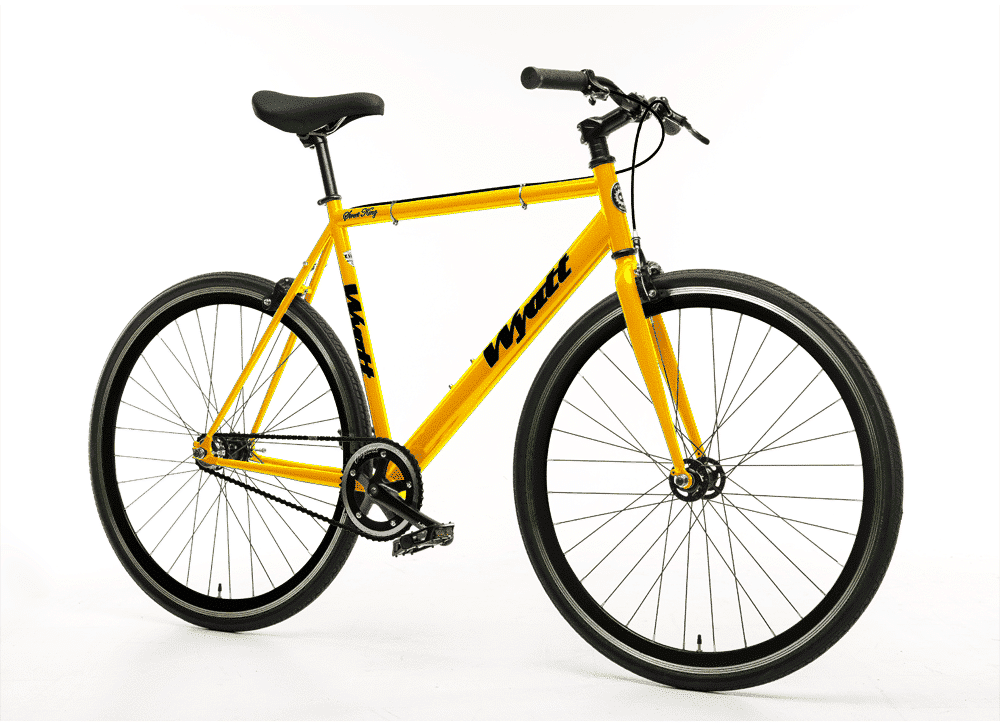 Simple, fun, and stylish. The Street King combines single speed simplicity and modern design to create the perfect bike for your daily commute.

Although there are many benefits to riding a single speed bicycle, there are situations in which a multispeed bike is necessary, such as if a rider has physical limitations or if the type of terrain such as sand or snow isn’t suitable for a single speed bike. If you are interested in a bicycle that can handle a wide variety of terrains, check out our Wyatt Driftless fat bike, which utilizes a multispeed drivetrain.

Previous Post
What is Kickstarter and how does it work?
Next Post
Pre-Season and End of Season Bike Sale