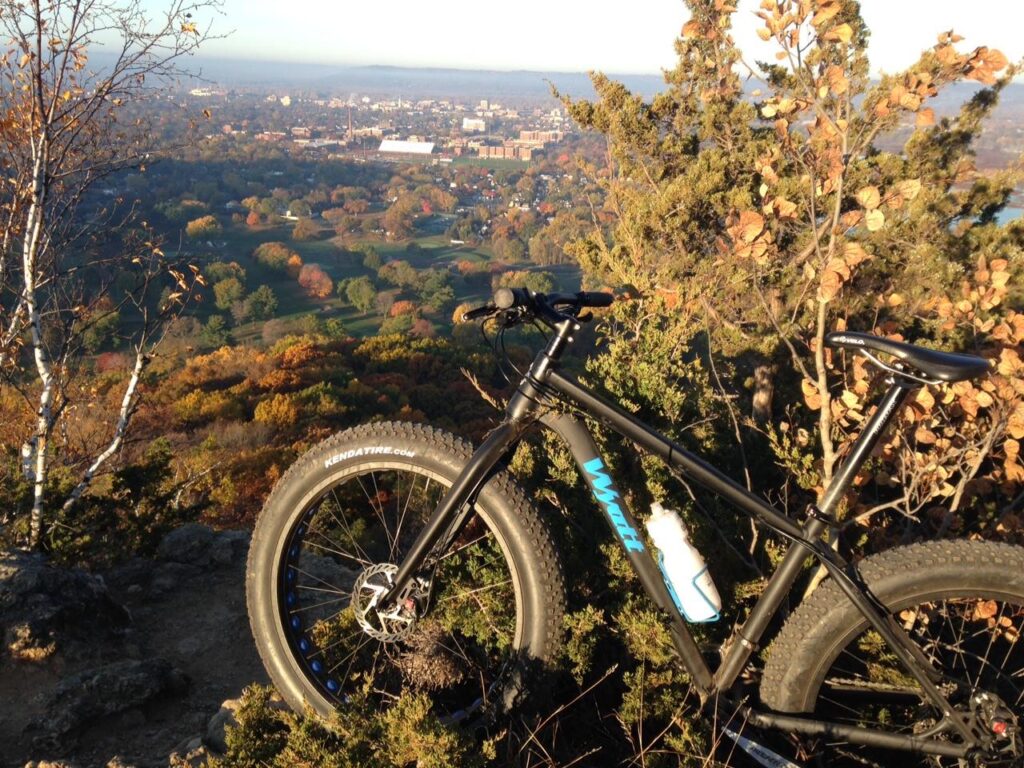 Written by: Chris Stindt – Chris is an avid cyclist from La Crosse, WI and loves to experience all the possibilities that cycling has to offer. Chris started fat biking when he purchased a Driftless fat bike in February of 2015. He has participated in several fat bike races and you can read about a couple here. Chris enjoys sharing his experiences with fellow riders to make it easier for them to prepare for their next adventure.

This summer I discovered group road riding… at 5:30 am.  The EMAG, Early Morning Anerobic Group, is a bunch of folks who do endurance sports in La Crosse.  The early morning part is no joke, but once I got past that, I really enjoyed the camaraderie and fitness.  What does this have to do with my fat bike?  Well the group has a ‘fat’ ride on Wednesdays in the Hixon Forest/Human Powered Trails area in La Crosse.   I’ll be honest, I’ve never done much off road riding – in fact the fat bike races I did last winter were the most I’ve ever ridden on single track.  So, I put off trying the fat ride.  Finally, toward the end of the summer I thought, what the heck, I’ll give it a try.

I got my butt kicked.  I haven’t felt that out of place on a bike…ever.  The guys were very friendly, but it was apparent that I was out of my element.  Probably not what you thought I was going to say.  However, I loved it.  I was exhausted, bleeding from a metal pedal spike to the calf, bruised, and glad I didn’t hit any of the trees I was aiming for.  And I mean, headed right for.  The fat ride starts at 5:15, and it was pitch black when we started, so I recommend getting a very bright headlight if you try early morning.

I spent the next few weeks on my road bike, but eventually decided to give off road riding another chance.  I can’t tell you how glad I am that I did.  I went back to the trails one warm fall afternoon and probably had the most fun I’ve had on two wheels.  To qualify that, this year alone I’ve ridden over 2000 miles.  I’ve done triathlons, commuting, winter bike races, summer bike races, time trials, you name it, and I was grinning like an idiot on my fat bike.  The trick was being able to see and not pushing myself beyond my limits.  With those two key elements, I totally ripped on the trails.  Or whatever rad word the mountain guys use.  I have a 2×10, and the gear range was plenty to get me up the 1000 feet of elevation, Strava told me I did.  I also decided to play around with my tire pressure, and right around 10 psi was a huge advantage for grip.  I definitely lost some speed on the road, but it was worth it tenfold on the trails.

A week or so later, I had a day off and before I got my eyes checked I decided to get out on the trails for a quick ride.  For my first two rides I had descended on the road, but I thought I’d try going back down the trail.  For those of you outside of La Crosse, this is a ride down a 600 foot bluff.  The tires provide just enough suspension, with grip for days.  And with daylight I could see ahead to plan, so I was much more in control, while still flying down the trail.  It was awesome!

Ok, so I should have tried my Driftless on the trails sooner.  What is my advice?

I love riding bikes, and I’m really happy to have another great use for my fat bike.  I use it for pretty much everything, and I’m sure at some point I’ll share more about that, but this has been the most fun!  I’m hopeful I will be much better on the trails this winter too.