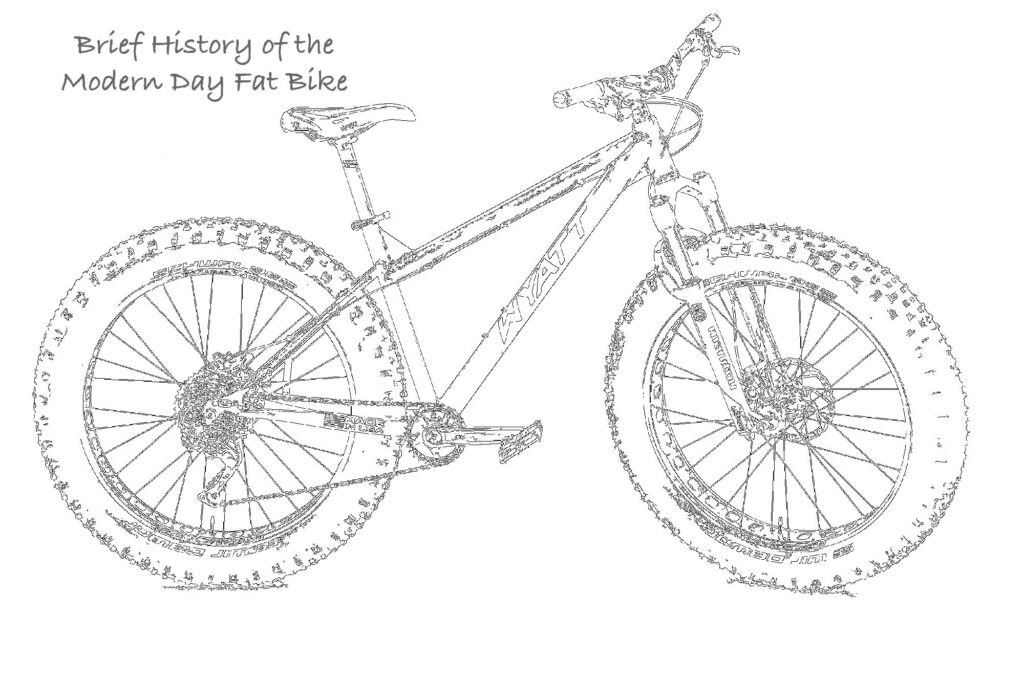 The history of fat bikes includes two stories of development in Alaska and southern New Mexico during the late 80’s and 90’s.

In Alaska, Steve Baker of Icicle Bicycle’s needed a bike that could traverse the snowy terrain of Alaska. He started out by welding two rims together and mounting two tires side by side creating a double-wide tire measuring 4.4” wide. Afterward, he welded together a frame to fit the wheels and the first fat bike was born.

Another Alaskan native, Simon Rowaker, saw this idea and decided to make a dedicated 44mm wide rim called the Snowcat, which eventually became the go to rim during the early 90s. They weren’t quite the size of modern fat bike rims of today, but they were the largest production rim of that time and highly sought after by adventure cyclists.

Then in 1995, Ray Molina of New Mexico, an adventure cyclist, tour guide, and frame builder took the 44mm wide Snowcat rims, welded them together and then took two tires and stitched them together to make them 4” wide. The benefits that he saw from the extra wide tires and rims were a game changer. By 1999, Molina had started Remolino Sandbikes and had a production sand bike ready for sale.

Soon after, Mark Gronewald and John Evingson from Alaska saw the potential of the fat bike and decided to purchase Remino wheels and tires to start producing their own frames. After the rims became hard to get, Evingson went to the largest bicycle parts distributor in the world, QBP, to see if they could supply him with a similar rim. He also brought his bike to Surly Bikes, a subsidiary brand of QBP, that focuses on designing steel adventure bikes. This was probably the most significant moment in fat bike history and Surly would end up producing a lot more than just rims.

Then in 2005, Surly released the first production level dedicated fat bike called the Pugsley. When the Pugsley was first introduced, it wasn’t immediately clear what it was for, unless you were from Alaska or participated in winter riding. The majority of people thought that there wasn’t a need for a fat bike unless you only wanted to ride in the snow. It wasn’t until several years later that other manufacturers started producing their own line of fat bikes and more dedicated parts started becoming available for fat bikes from the top parts manufacturers.

Fat bikes began to evolve and those who originally didn’t see a need for a fat bike may be surprised by the modern mountain bike innovations that have found their way into current fat bike design. Lightweight wheels and tires, trail-oriented geometry, and high-end component compatibility have made today’s fat bikes fast and maneuverable while still preserving their ability to go where no bike has gone before.

For a more detailed explanation of the history of fat bikes, please follow the link below.  “A Brief History of Fatbikes” Adventure Cycling Association, https://www.adventurecycling.org/resources/blog/a-brief-history-of-fatbikes/ Accessed 11 Nov 2018.