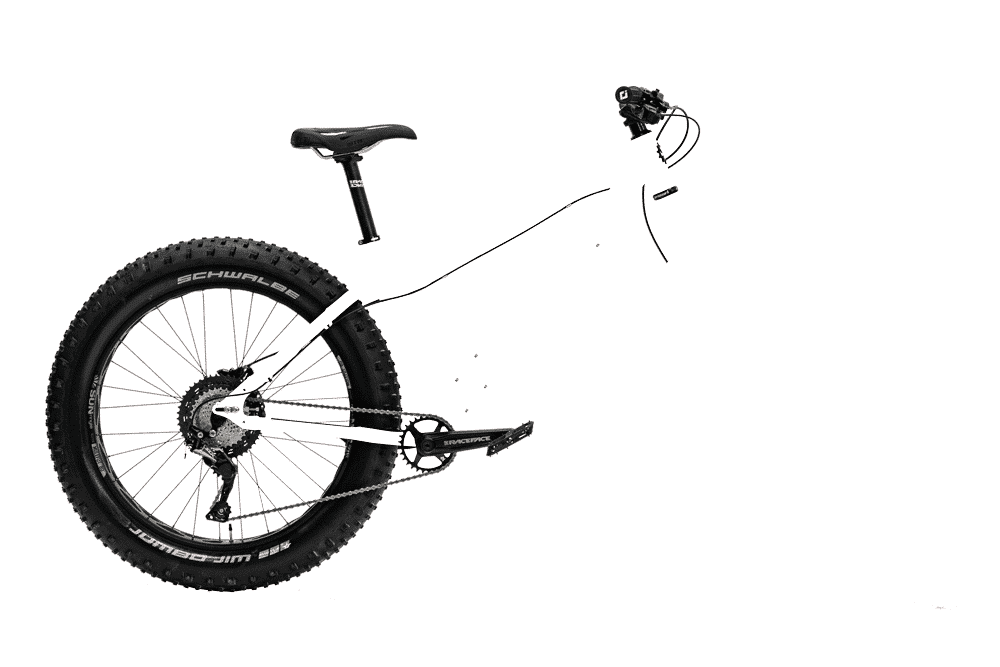 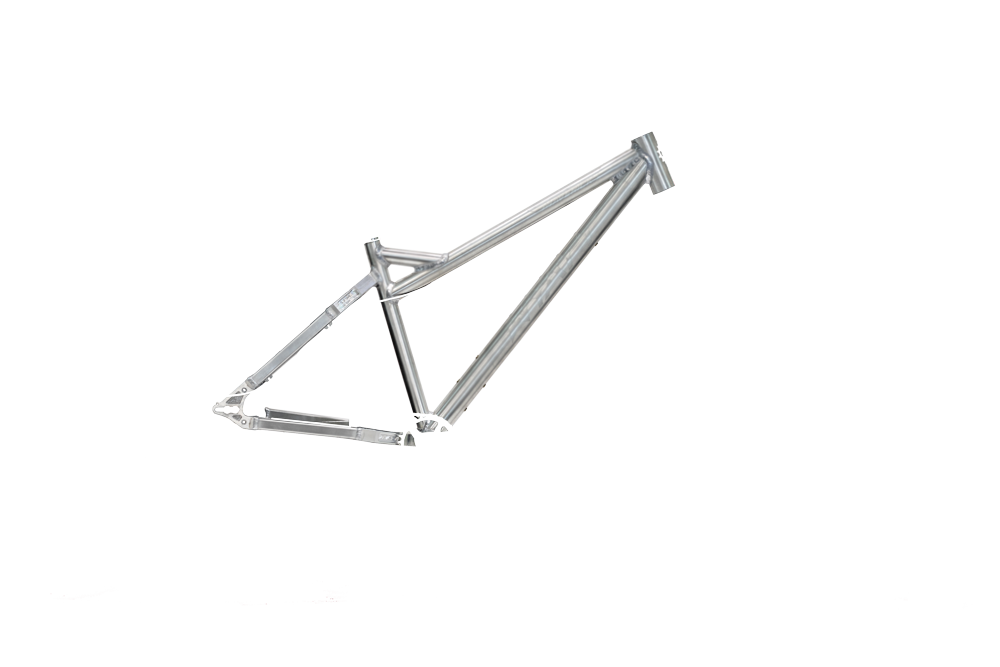 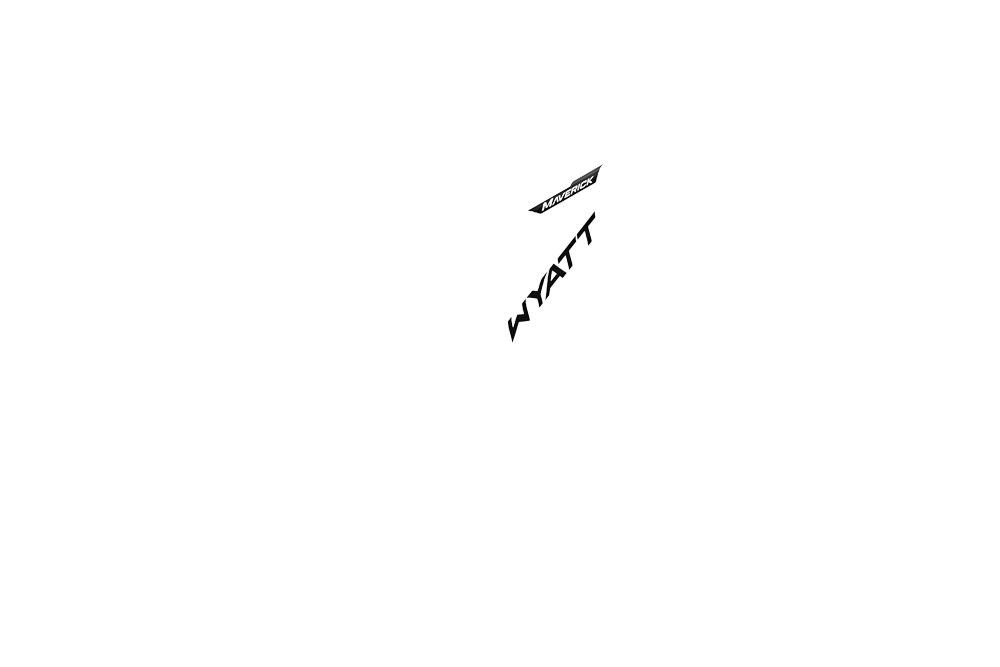 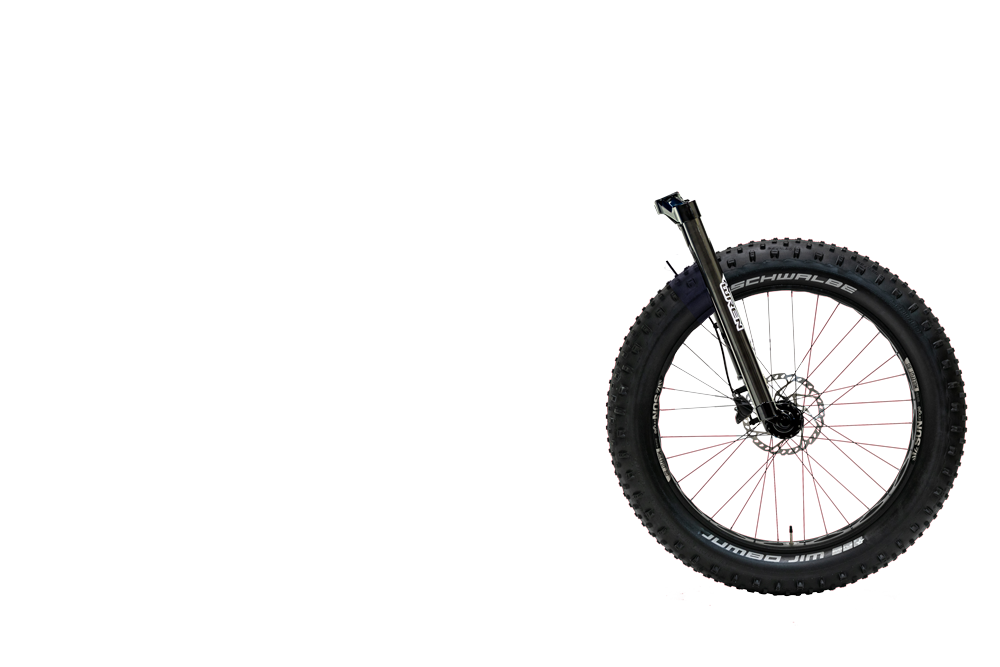 Maverick is an American-made fat bike with modern trail geometry designed for having fun whenever and wherever you ride. Manufactured in Bangor, WI. Available as a frame only here.

*Please note that this lead time is an estimate based on current production volume and component availability. While we make every effort to manufacture bikes as fast as possible, sometimes issues arise that can affect lead times slightly. We appreciate your patience!

If you are able to source your own parts, our Maverick frames are available for sale here.

Just like the name implies, Maverick is different from the rest of the pack. It is an American-made fat bike with modern trail geometry and massive tires. It is the missing tool to keep your free riding spirit alive when the snow hits the ground. The Maverick’s roomy cockpit is made for short stems and wide bars for better control over the big front tire. The slack head tube angle, low bottom bracket, and optimized chain stay lengths make for a balanced ride to keep you feeling confident on the steep downhill sections and allow you to climb like a mountain goat on those daunting hills. Maverick is designed for having fun whenever and wherever you ride.

Customize the color and components of your bike to fit your riding style and budget.

We’ve taken a different approach to frame design by using oversized American-made 6061 tubing up front and rectangular tubing in the rear, matted to CNC’d chain stay and seat stay yokes. This burly design reduces frame flex, improves torsional compliance, and enhances power transfer from each pedal stroke, while giving our bikes the unique aggressive look that we are becoming known for. The incorporation of CNC’d yokes also allows our frames to have greater tire and chain ring clearance, while creating stronger weld joints due to a more precise manufacturing process. 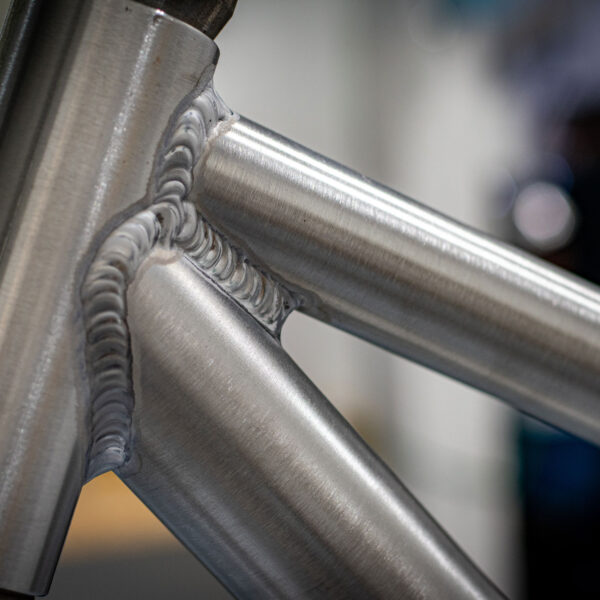 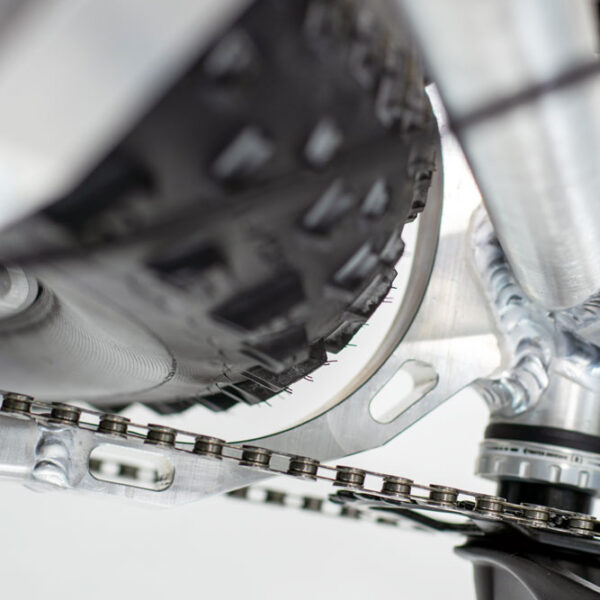 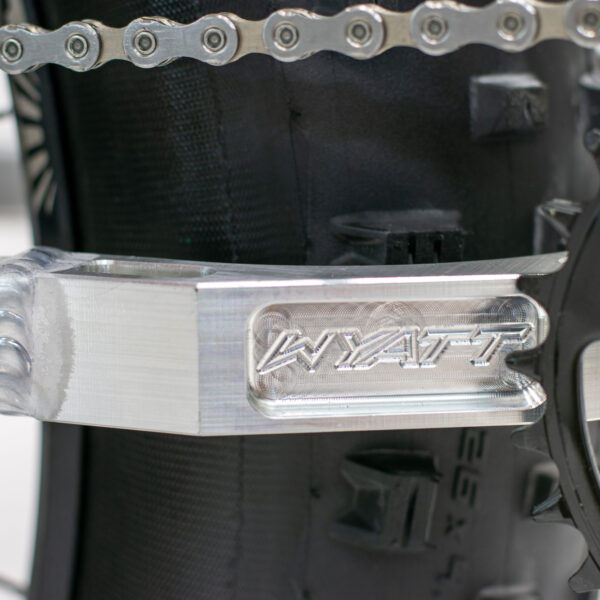 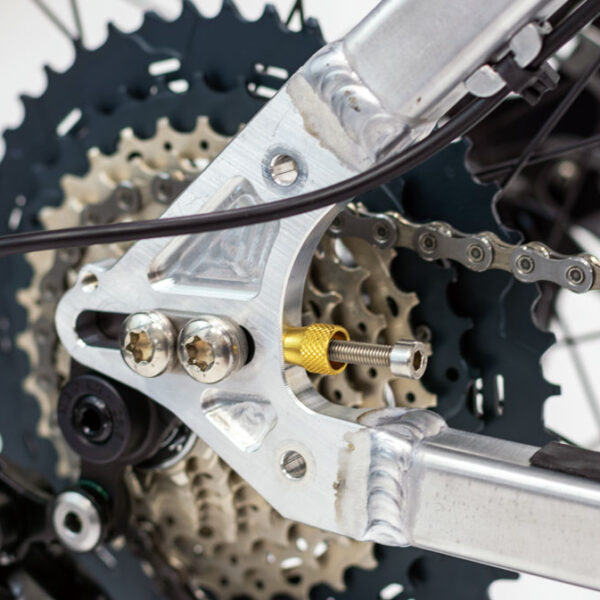 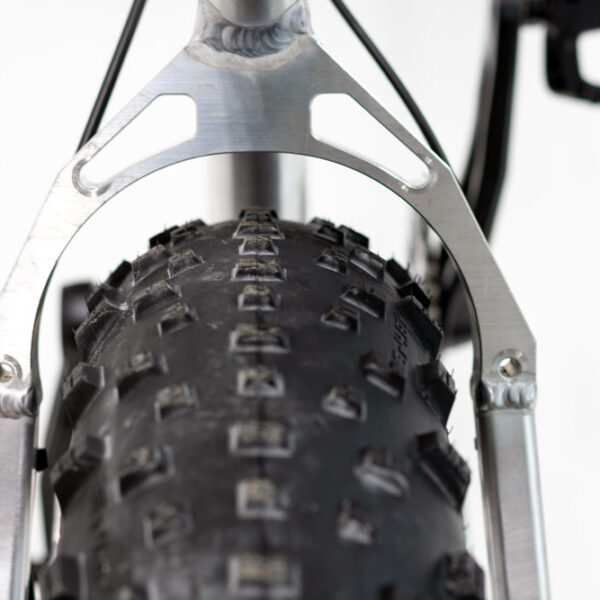 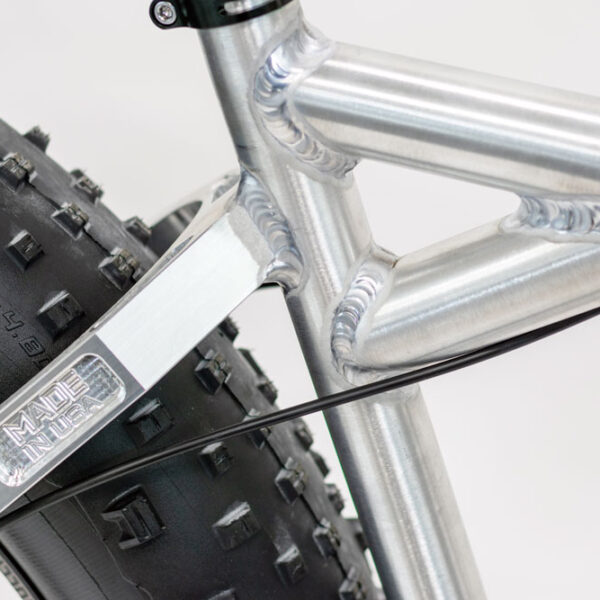 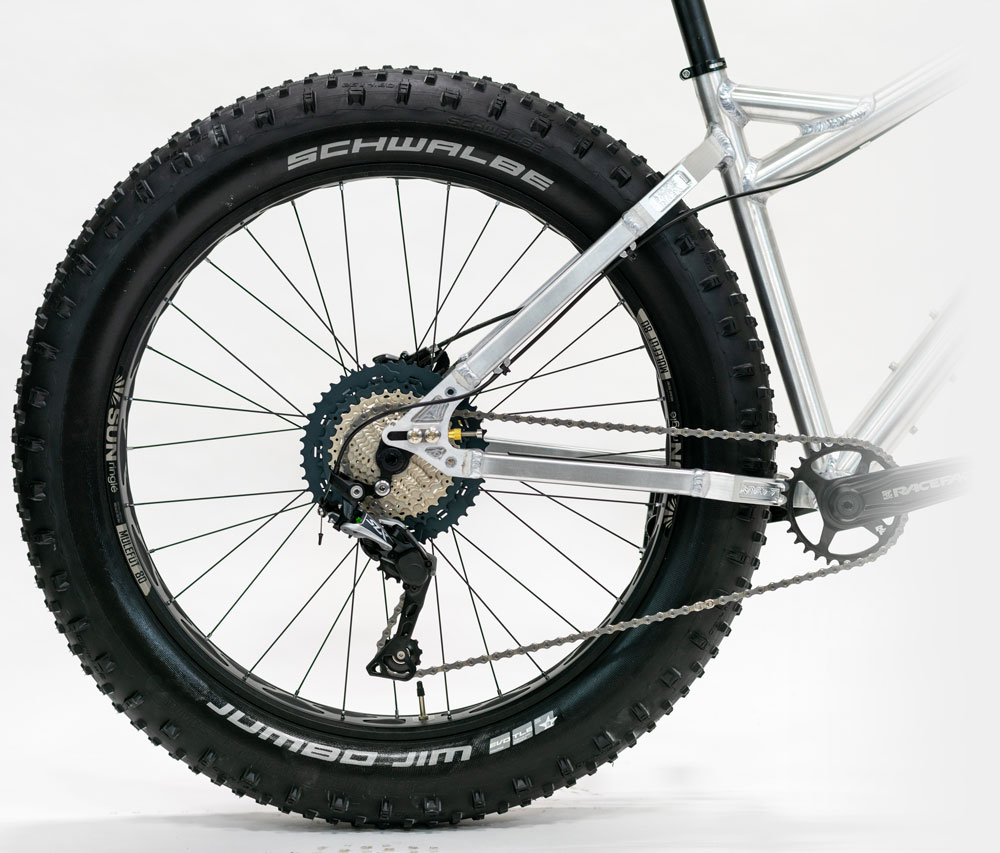 Water Bottle Mounts: 2 locations (above and below down tube)

-Standover is measured 70mm from the front of bottom bracket center

A current trend in the hand crafted bike industry is choosing a bike that is delivered with a factory raw finish. The factory raw look best reveals the manufacturing quality and technical details of the frame. Factory raw frames are not coated after production, but move directly to assembly. Over time, an oxide layer/patina forms on the frame, causing the shine of the raw aluminium to fade slightly. With the help of a polishing compound or cleaner, the old shine can be restored in a few easy steps.

If you decide to customize the color of your bike, you can choose from a selection of several different powder coat colors. If there isn’t a color shown on our bike build page, please contact us for custom options. Powder coating is an advanced finishing process that is a extremely durable and more resistant to chipping, scratching, fading, and wearing when exposed to snow, rain, and the hot sun.

The Maverick… what a bike! Kudos to Wyatt and his staff for building an incredible machine, and providing superb customer service. Wyatt kept me informed through the whole process and in particular with the seemingly never ending (through NO fault of Wyatt Bicycles) supply chain issues. It was WELL worth the wait. They will not build/sell you a bike that does not suit your needs perfectly. I most highly recommend this company!

M
M (Wilsonville, OR, US)
Fatty can FLY

Wyatt Bikes are top notch! Wyatt was very accommodating and was very responsive. It was great to bounce ideas off him for components.

The bike could just be called the Terminator because it is a bruiser. I got mine in raw finish and it is awesome. I have taken the bike to both a BMX park as well as a challenging bike trail full of swooping downhill, techy switchbacks, and steep climbs. The thing can absolute fly and is very nimble!

I got an XL and am 6’5 and it fits awesome. Plenty of room to move around the bike

Also, I took a lot of pride in knowing my bike is made in the USA 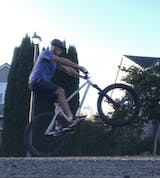 (this is the daughter) For my 16th birthday I got the option between a bike or a car, obviously I chose a new bike. After doing a ton of research we came across Wyatt’s bikes. When we found out it was custom made in Lacrosse we jumped at it! Considering the current bike shortage, the wait was appropriate and totally worth it! The bike rides amazing and goes right over any boulders. I’ve had it less than two weeks and rode it multiple times. As a plus, it looks super cool, meeting Wyatt was super cool. I definitely recommend if you are looking into a new bike! 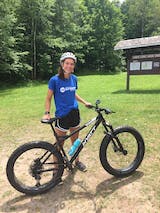 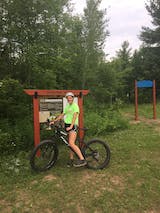 My husband and I purchased our first fat bike and we are loving it so far. We have been riding it on the local MTB trails and can't wait to try it out this winter. Everything was setup well from Wyatt and the bike feels great to ride, especially the front suspension. Would recommend this bike to anyone looking for a frame builder in Wisconsin and a way to support the local bike community. Thanks Wyatt! 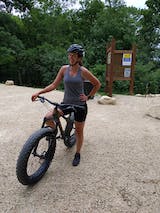 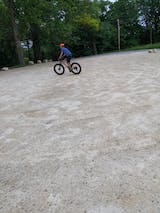 I absolutely love my bike. I wish for the price, that it came with a kick stand, but other than that, I love love love it.

Handmade one at a time, finished with your choice of top of the line components. Buy from Wyatt and you are supporting an American company that employs real craftsman, not some foreign, robot assembly line. What you get for your money is priceless in todays corporate, profits first world. You get a custom quality product and service unmatched in the industry.

S
Steve Metz (Oshkosh, WI, US)
Excellent Product, Great Customer Service and Made in the USA

When I set out to buy my first new bike in 17 years, one of my first criteria was 'made in the USA'. I quickly found that all of the large brands made few, if any bikes domestically. During my research I found Wyatt Bikes in Wisconsin which is also my home state. Wyatt makes a technically sound product with high level of options and customization. Most impressive is the entire frame is heat treated after welding, which makes the welds and associated areas consistently strong. Combine this with excellent customer service and it is a winning combination. Highly recommended!

As a backdrop, I ride an Ibis Ripmo V1 in the summer, which is an amazing trail bike. The geometry of the Maverick shares some of the features that make the Ripmo V1 such a great bike. In fact, the Maverick shares geometry characteristics with the top rated trail bikes marketed today, but I can see where the slight modifications improve handling in the snow. I love the upright position provided by the steep seat tube angle. It provides a comfortable position for riding uphill and makes the bike climb very well. The front remains planted while my weight is balanced nicely for traction on the snow. It maneuvers around switchbacks with ease. Overall, I would say the geometry is really spot on. Modern and seems to keep the bike planted on snowy surfaces. When I was comparing geometries while considering a fat bike, it was clear that the Maverick was in a league of its own.

My Maverick is set up with a Wren inverted fork, which has a short offset. Combined with the head tube angle, this bike is very stable and confident going downhill. I'm actually excited to ride this bike in the summer as well. I have ridden down some very steep faces in the snow—lines that others have not attempted. The bike inspires confidence going downhill. It feels well controlled on steep, technical faces.

At slow speeds, the Maverick is well balanced. It maneuvers easily. While it is more capable downhill compared to probably all fat bikes made today, it still can be maneuvered at slow speeds. Again, that speaks to the geometry being in a sweet spot.

It is also still quite playful and can be moved fairly easily. It manuals easily. All around, it is a fun, fun bike. And it has fantastic looks. I love the design. I also live in Wisconsin and drove to the shop to pick up the bike. What an awesome experience to meet Wyatt and see where the bike was made. I went back and forth with Wyatt on specifics with my bike as well. Wyatt was easy to work with, and was very helpful. Finally, the parts choices that Wyatt provided are fantastic choices. Pro taper and Deity parts. High quality, but also those parts are an outstanding value, which are passed on to the buyer.

Overall, I am so happy that I bought a Wyatt. I can’t say enough good things about the bike.

I've ridden some nice bikes in my time but when I got this Maverick I was pretty blown away... Wyatt's got the geometry nailed on this one! Everything feels like it is exactly where it's supposed to be.. very agile and balanced. Not only is it unique among anything else in the hardtail fat bike world, it's also a very light weight tank. Definitely a head turner. Working with Wyatt bikes to get this thing specked was also very nice. If you're on the fence about this one... Jump on over... It really nice on this side! 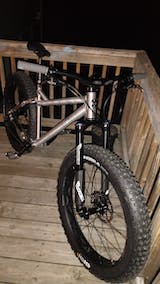 This was my first purchase of a fat bike. I wanted to buy US and found the perfect builder. I live on the Oregon Coast where the conditions are extremely wet and muddy with massive tree roots. I like to climb and push myself technically. I trusted this builder to meet my criteria and I couldn’t be more impressed. The frame is well designed and robust. I have always appreciated the craftsmanship and structural assurance of well executed welds.
After just a couple of weeks I’m still getting to know the bike, but I can tell you that I have been very pleased with my initial experiences. It climbs surprisingly well and is responsive in tight turns giving me the confidence to push it. By no means are my skills currently commensurate with the Mavericks capabilities, but with this bike I can meet the challenges. And darn, it’s just nice to look at. The frame is olive drab with bright green highlights. The few folks that have seen it are taken back by its “kick ass” command presence. And when they see the “Made in the USA” decal... well, it’s a statement of pride. We made that!
In a few months I will write another review with more technical details. I’m really looking forward to testing the Maverick’s capabilities. Right now, I see open ended possibilities. Thanks Wyatt!

Built with Pride. Made to Ride.

Every Wyatt bike is designed and manufactured in the heart of the Midwest where our passion for quality is as strong as the Mighty Mississippi.